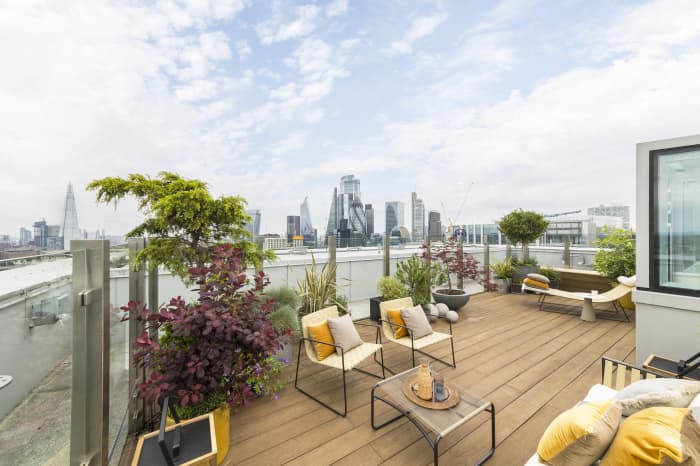 LISTING OF THE DAY

This three-level penthouse atop the 22-story Cashmere House offers a wealth of outdoor spaces, including a covered terrace, multiple balconies and an open rooftop with panoramic city views.

“The owner bought it for entertaining,” said listing agent Tina Evans, of Frank Harris and Co. “She has a lot of parties on the middle floor.”

You enter the apartment on its lowest level, the building’s 20th floor, which holds a large open-plan reception room, the main kitchen and the three bedrooms.

“Two of the three bedrooms have glass boxes that jut out from the side of the building,” Ms. Evans said.

The primary bedroom suite features a walk-in dressing area, double doors that open to a balcony and a bathroom with two sinks, heated towel racks and a walk-in shower.

The triple-aspect reception room on the lowest floor has “three walls of windows looking out on most of London,” she said. “It’s pretty spectacular, actually.”

The reception room features doors that open to Juliet balconies, and encompasses the Poggenpohl main kitchen, which has Silestone countertops and Siemens appliances. A dumb waiter goes from the main kitchen on the 20th floor up to the entertaining area upstairs.

Other architectural and design features include remote-controlled blinds, irrigation systems for the terraces, walnut Elka flooring throughout, under-floor heating and smart-home technology.

From the first level, internal stairs go up to the middle and top floors. The middle floor has an open reception room, massive outdoor terrace and a kitchenette, which combined make it well-suited for entertaining.

The 2,870-square-foot penthouse has three bedrooms, three full bathrooms and two partial bathrooms. There is also more than 1,000 square feet of exterior space.

Amenities include two parking spaces. Residents have access to 24-hour concierge services, a swimming pool, a gym, a cinema room and a meeting room.

From Penta: Les Paul’s Personal ‘Number One’ Guitar up for Auction

Cashmere House is within the new Goodman’s Fields development at the eastern edge of the City of London, which has about 800 apartments, Ms. Evans said. It is within walking distance of the Tower of London.

Other nearby attractions include Wilton’s Music Hall, Brick Lane and Spitalfields, which has a covered market and diverse selection of shops and restaurants.

Write to Listing of the Day