I love August in Britain, a time to relish decisions and choices made in the garden in previous summers and then to find new ones. Readers’ queries for August have changed since 2019. They used to want advice on where to go to see gardens in challengingly hot weather while on holiday in Provence, Tuscany, Sicily and even Greece.

I found those requests misplaced but very heartening. On a sun-and-swimming pool holiday, a significant proportion of you were pining for gardens instead. However, August is not the month to see most of southern Europe’s at their best.

Since the lockdowns, good old Britain has become Britain’s August destination by default. It offers so much to keen gardeners who are willing to desert big cities. I use it for targeted travel, for next year’s new plants and for a deeper appreciation of English landscape gardening. Here, in outline, is how all three work.

Britain’s range of historic gardens is unsurpassed. At times they inspired Europe; at other times they drew on European style. Enough survive, at least in outline, to fill a dozen Augusts with happy outings. On hot days the shade of a copse or a park tree is a joy.

In Oxfordshire, great survivors exist within a small radius from Oxford, more than most of its university’s students of history and literature realise. They would more than fill a short holiday. Eighteenth-century Shotover Park and Nuneham Courtenay, Anglo-Indian Sezincote, the huge grounds of Cirencester Park, landscaped by Lord Bathurst and best seen in overview from the spire of Cirencester parish church: these fine settings retain historic bones and are worth tracking for their open days during the month.

Bigger sites are even more accessible. During last year’s lockdown I began at Blenheim Palace in Woodstock, almost as grand as Versailles but more intelligible on a first visit. Its main lake remains a wonder, despite recent invasions of pondweed. Master designers, including Vanbrugh, London and Wise and Capability Brown, contributed to what is still visible, even with the recent clutter of summer moneymaking events.

Blenheim is such a major survival that it sometimes goes missing in gardeners’ ideas of where to go. During a recent dry summer, the lost outlines of London and Wise’s original parterre by the palace became visible through the browned lawn.

On a lesser scale, nearby Rousham Park is unmissable, not just for the house and its Gothicised facade, as we illustrated here when I wrote in June about the BBC adaptation of Nancy Mitford’s The Pursuit of Love, for which the house and its immediate grounds were the setting. The true genius of the place is the landscape garden beyond, which descends a sloping grass bank to the river Cherwell.

It retains several of its original temples and architectural features and copies of original statues, all integral to the garden since its re-landscaping by its maestro, William Kent, from the late 1730s onwards. Here, as Horace Walpole later wrote, Kent first “leapt the fence, and saw that all nature was a garden”. In August the play of light and shade is heavenly. 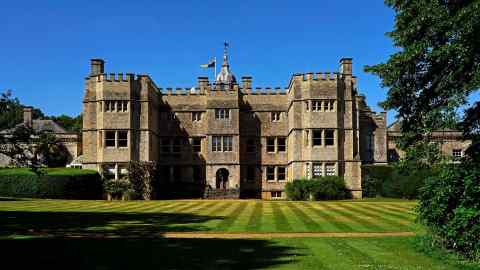 Two bigger, nearish landscapes in Buckinghamshire are unmissable too. The well known one is Stowe, whose big house remains a celebrated school, but whose park and gardens have been in the hands of the National Trust since 1989. The garden’s temples, monuments and underlying meanings need a good map and a full day on foot to be appreciated, but they remain unsurpassed.

Vanbrugh, Bridgeman, Kent and Capability Brown all worked here too on the grand scale, mostly for Lord Cobham, their Whig patron. Enough has been saved or restored to give an idea of their developing play with the landscape, but an up-to-date guidebook is essential for enjoying what their buildings and grassy features were intended to express.

Off the A41 from Bicester, near the village of Ludgershall, the remarkable house and big park at Wotton Underwood are not so well known, but are Stowe’s natural pair. On a sunny day in early July, I went round them with a group guided by John Phibbs, expert on Capability Brown and an adviser to the site for many years. The long circular walk by the lake is the one to follow, taking visitors round what Phibbs well explained as an ornamental farm, or ferme ornée, in the centre, laid out in the mid 18th century.

The FT Weekend Festival returns to London’s Hampstead Heath on September 4 — the first time it has been held live since 2019.

Speakers on the House & Home stage will include FT columnists Luke Edward Hall and Robin Lane Fox, among others. For more details and to book tickets, visit here

It is as well preserved in outline as any in Britain. Intermittent bridges and wooden temples have been restored, making the plan and its carefully chosen viewing points more intelligible. It has a special open day billed for August 31 from 2pm onwards and as its master patron was Lord Grenville, later a Georgian prime minister, it is linked to William Pitt and British political history.

From Croome Court in Worcestershire, with its church by Capability Brown, to the fine lakes and park of Studley Royal in North Yorkshire, from the superb 18th-century landscaped park at Stourhead in Wiltshire to the Victorian and orientalising gardens of Biddulph Grange in Staffordshire, August walkers, picnickers and gardeners are spoiled for choice. Britain’s range of historic park-sized gardens is unsurpassed, an encyclopedia of changing taste and aesthetic principles.

For gardens with flowers, the choice is just as remarkable. Out of hundreds here are some of my top ones, all with plenty to see in August. Kiftsgate Court in Gloucestershire remains undimmed, even after months of lockdown, thanks to its family owners’ energy. Great Dixter in Sussex is run on a grander scale, carrying forward the ideas and plantings of its former occupant, the famous Christopher Lloyd.

Up in Shropshire, Wollerton Old Hall delighted me with its superbly planned planting and colour control on my first visit last year. It is a delight and an inspiration for smaller gardens through the many cameo plantings in its constituent parts.

The lovely gardens at Coton Manor, Northamptonshire, are another family achievement, one of the most satisfying examples of colour planning and placing, especially as the year advances. It gives me impetus after every visit to try to do better at home.

These fine gardens sell excellent plants on stalls near their points of entry. Many nurseries have had a surge of demand since lockdowns began and so the stocks of those with online service have begun to dwindle long before the season’s end. Personal visits are the way to hit on special items, especially through digitally reluctant sources.

Travel then, with the RHS Plant Finder text to hand, the essential guide to the densely rooted undergrowth of nurseries on which all our gardens depend. I will not give specific nursery names because customers then descend and clean them out. Attend to the Plant Finder entries and then check them online to find where they lie in relation to your grand garden excursion. There will be hits and misses, but many more hits.