If you’ve ever built a home — or even remodeled a room — you know that making all the design choices can be daunting. Imagine how many decisions it takes to build a $37.5 million custom home.

That’s what Christy Thompson is doing with her property at 6915 Baltimore Drive in University Park’s Volk Estates neighborhood.

She chose doors, countertops, hardware, paint colors, flooring, materials and even elements of the layout, and seems undaunted by the process.

The homeowner — who is also a real estate investor with multimillion-dollar properties across the world — decided to build a custom home when she couldn’t find a new house with all the elements she wanted. The home is built on a double lot, part of which was a property that once belonged to her grandparents. The family also owns property across the street.

Thompson, the daughter of late Texas wildcatter J. Cleo Thompson, is well-suited to the task. She says she’s taking a hands-on approach, incorporating design elements from other homes she owns or was inspired by.

“I have luxury homes all over the country, and I took bits and pieces of my favorite aspects of various homes and incorporated them into this home,” Thompson said.

Even though she’s designing her dream home, Thompson wanted to take advantage of the current real estate market, so she put the property up for sale. The custom build is now on the market, with a completion date estimated for spring 2022.

“The demand for homes has risen exponentially, and I thought that I would try to capitalize on that market and see what would happen,” Thompson said.

Co-listing agent JB Hayes of Briggs Freeman Sotheby’s International Realty said it can be a challenge to sell a home of this size while it’s under construction because buyers can’t envision what the home will look like when it’s finished.

But the 23,688-square-foot home is well on its way to completion: It has a foundation, walls, doors, flooring, kitchen cabinets and bathroom fixtures.

The Mediterranean, or Santa Barbara-style, design is the work of architect Richard Drummond Davis and builder Stuart McIlyar. The home sits on more than 1.8 acres. The exterior of the home is finished in a stone imported from Bulgaria that has a density of 10,650 pounds per square inch, according to documents provided by the listing agent. For context, the density of commercial-grade concrete ranges from 3,000 to 5,000 pounds per square inch.

The home has six bedrooms, eight bathrooms and three half-bathrooms, plus a library, a wellness and exercise area, a theater and a massive basement that includes a catering kitchen, space for seven electric car stations, a bonus room or safe room, and wine storage.

The foyer, with floating double staircases, will have black-and-white panda marble and a massive chandelier. The library fireplace has an amethyst surround that adds a pop of color to the warm tones of the wood-paneled room. On the front side of the library, there’s a designated reading room that is one of the octagonal spaces you see when looking at the front of the home. Thompson said she wanted a space that felt peaceful and had natural light but also got the benefit of the shade from mature trees nearby.

The home has a large office near the library that has an antique mirror from India on the ceiling. The room is designed to accommodate two desks, and Thompson said she added counter space that would make it possible to slide a rolling office chair from one end of the desk to another.

The kitchen, which is open to the great room, has bright blue stone countertops (called azul macaubus) and cabinets with a unique texture. The game room has a pecan and hickory beamed ceiling, and the bathroom next to it (which will also serve as the pool bathroom) is clad in a vibrant turquoise stone called Amazonite.

Throughout the home, Thompson sourced doors from India that have intricate designs.

One bedroom suite is on the lower level and was originally designed for Thompson’s mother. It has its own garage, plus a large bathroom and a bedroom with a coffee bar and a walk-in closet. The primary suite is on the second level with the remaining four bedrooms and has its own wing in the house. The suite has bay windows and space for a seating area, plus a coffee bar and two large closets. The primary bathroom features rose quartz and the same turquoise blue Amazonite stone featured elsewhere in the home. 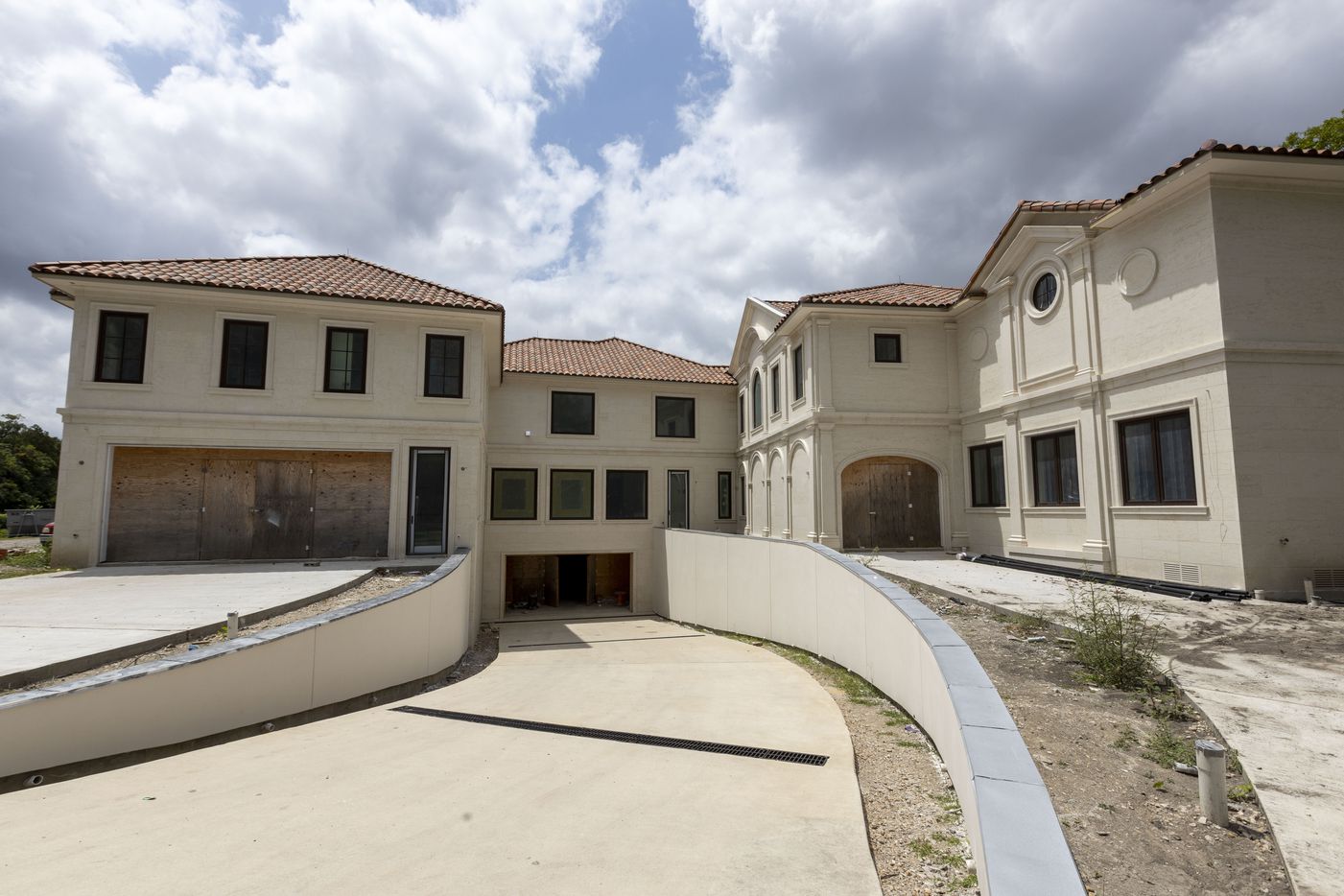 1/17The home at 6915 Baltimore Drive, designed by Richard Drummond Davis, is listed for sale for $37.5 million.(Elias Valverde II / Staff Photographer) 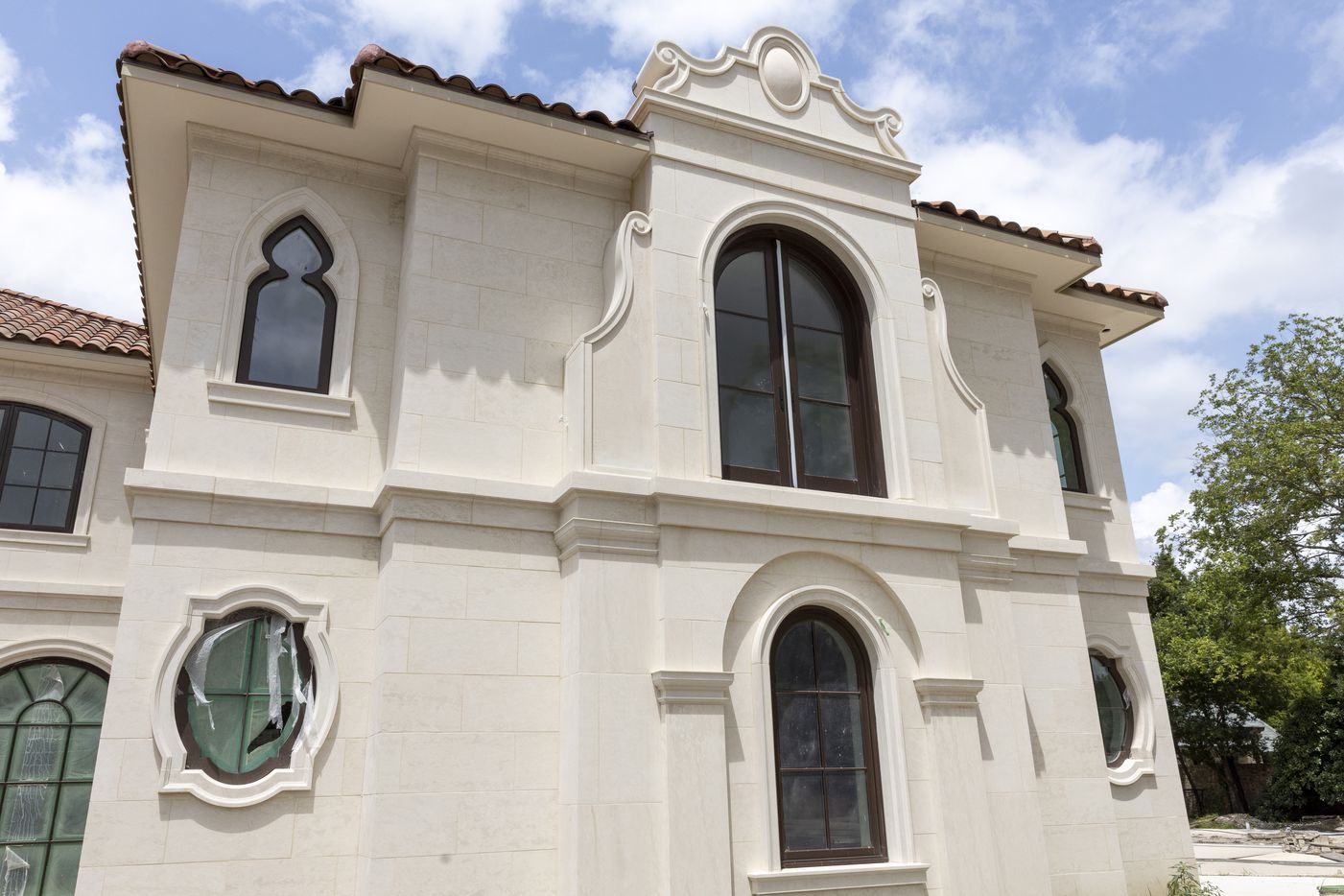 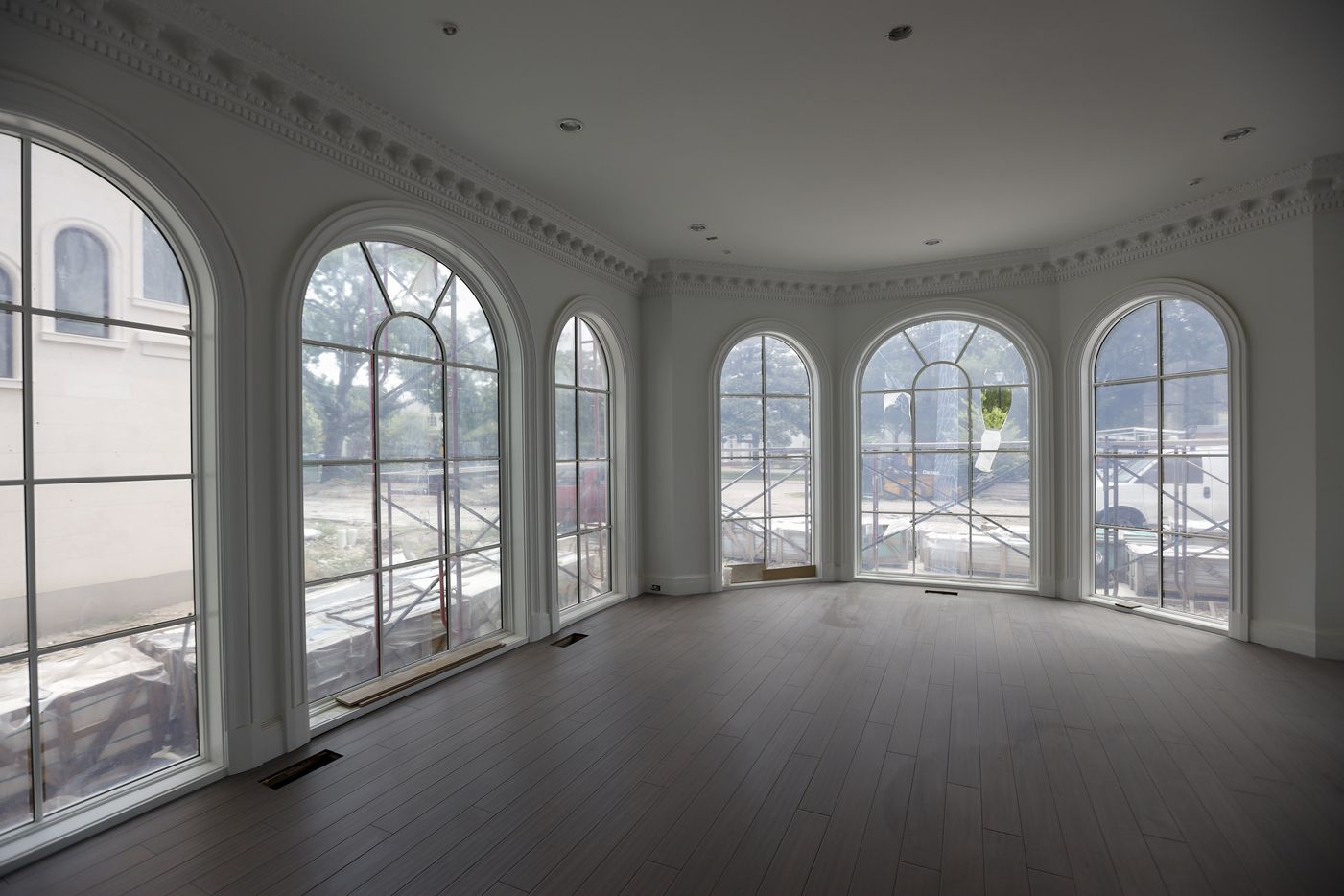 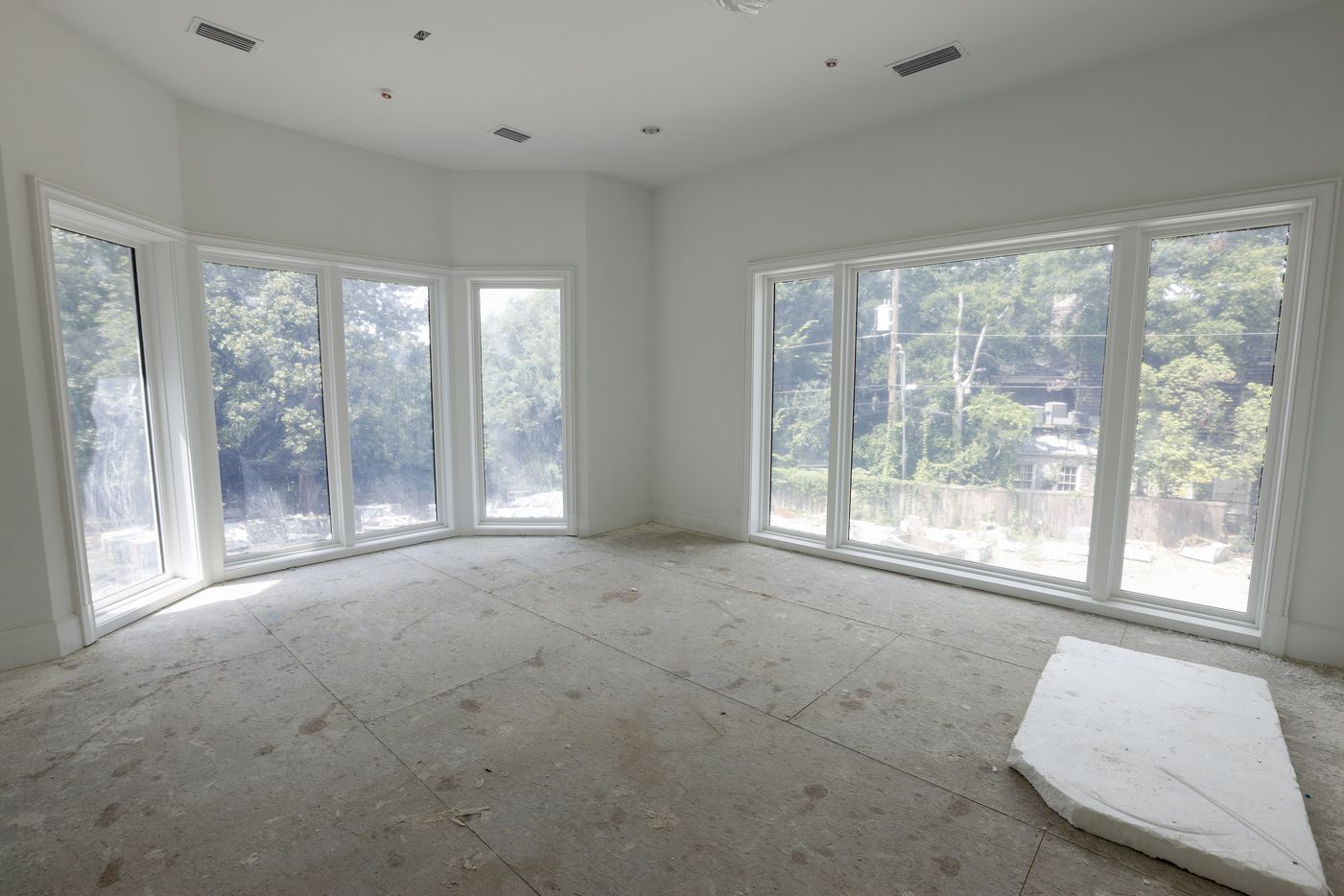 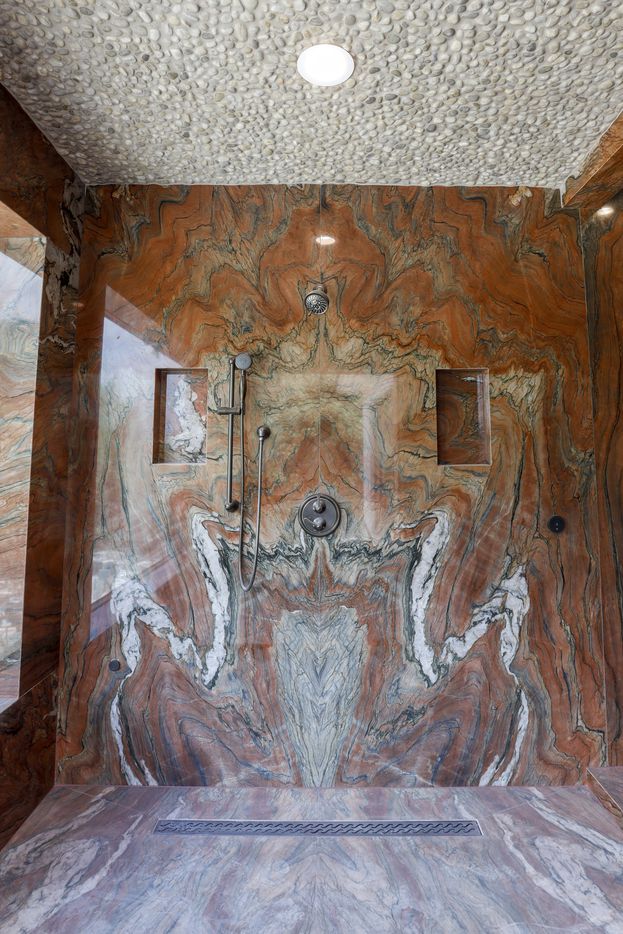 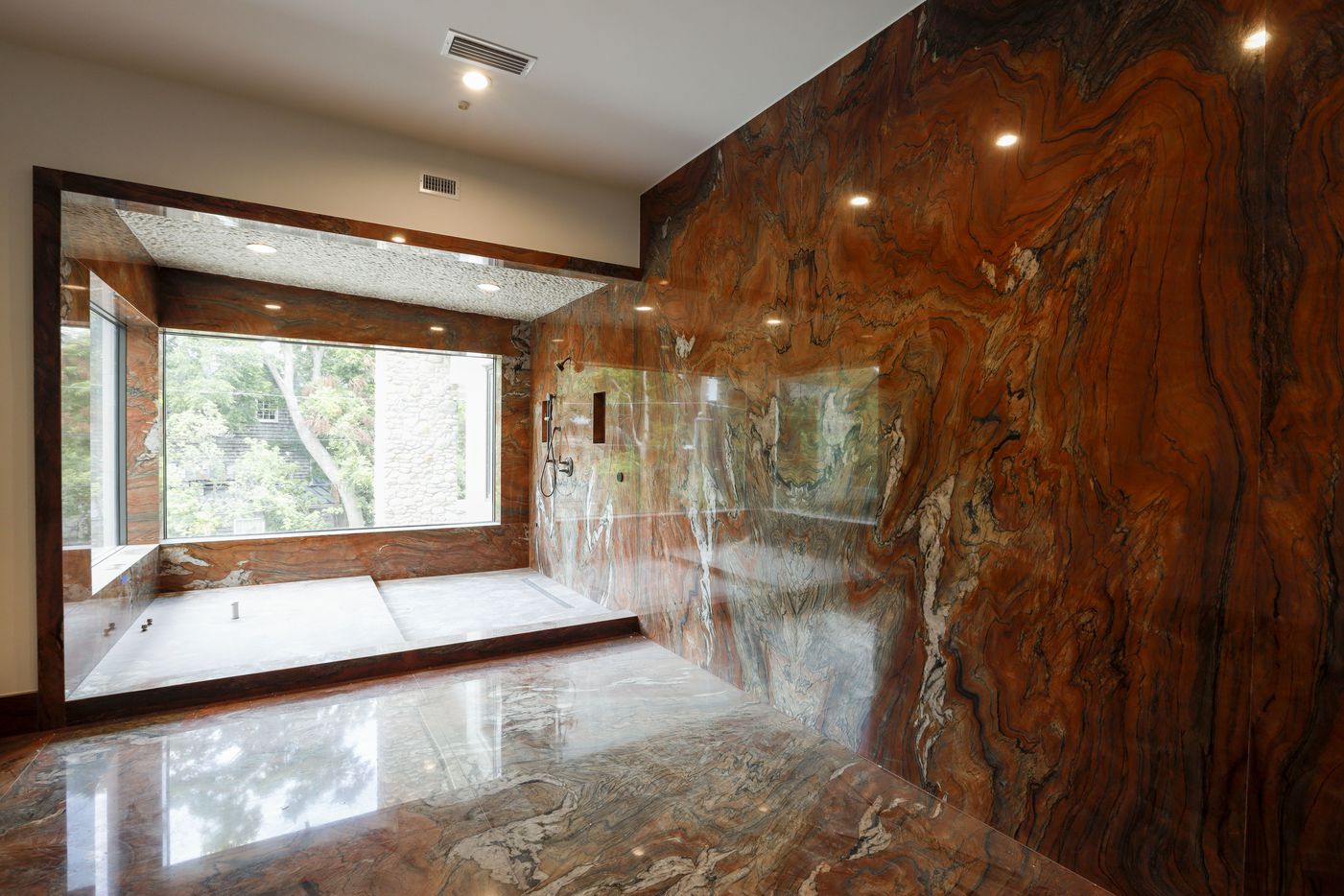 6/17The spa bath will have a steam shower and a sandstone bathtub.(Elias Valverde II / Staff Photographer) 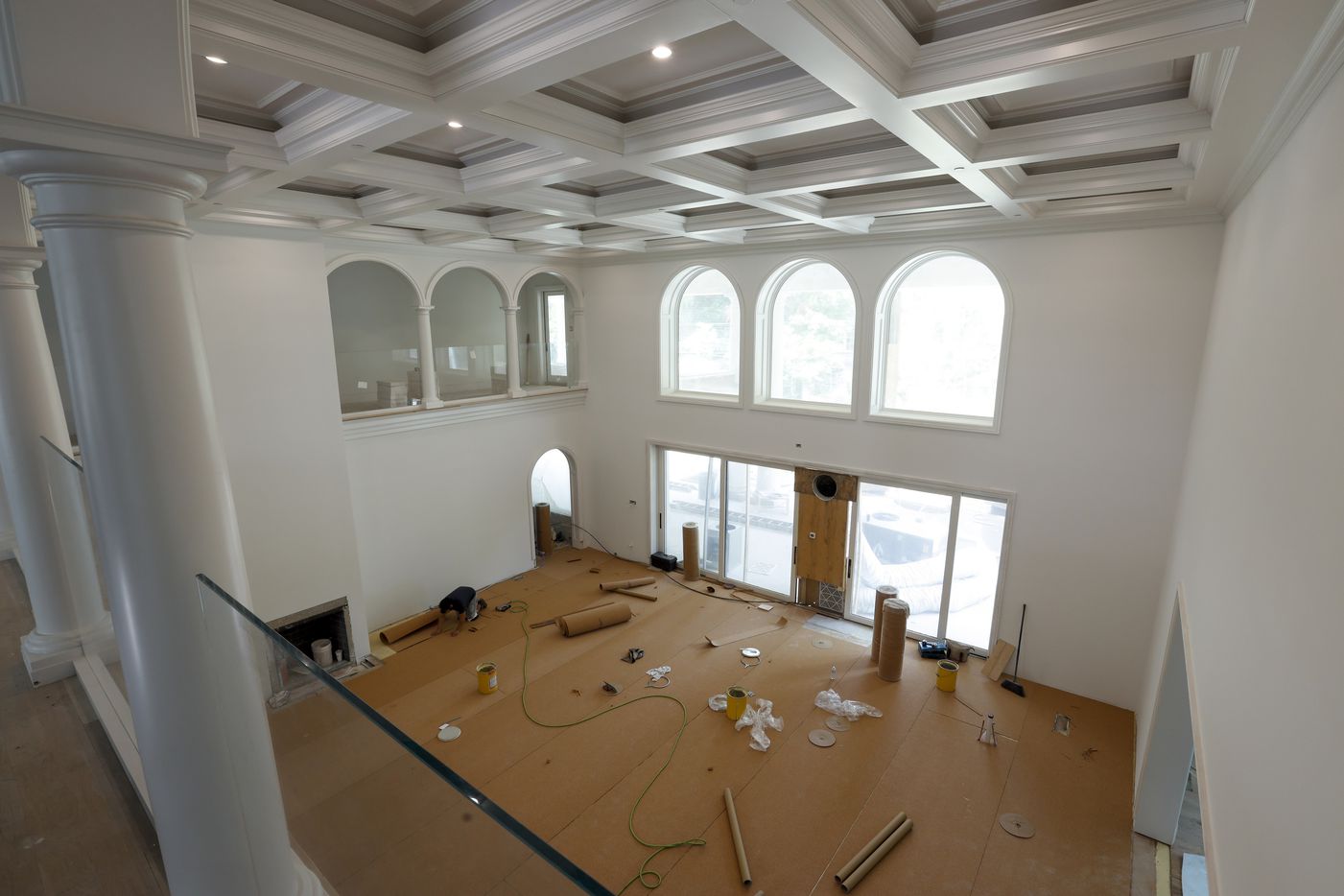 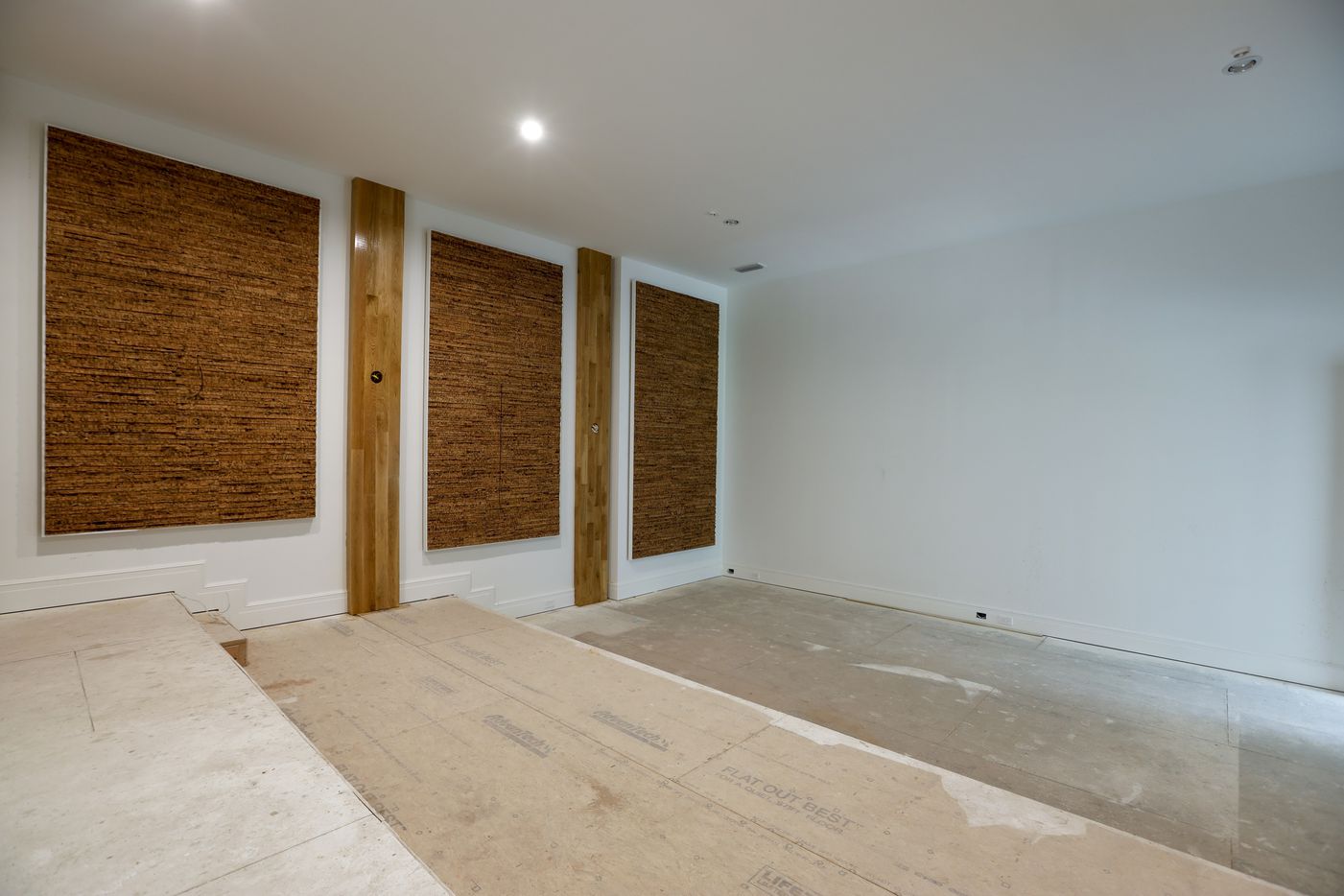 8/17The movie theater has tiered seating for 12 and additional seating for six.(Elias Valverde II / Staff Photographer) 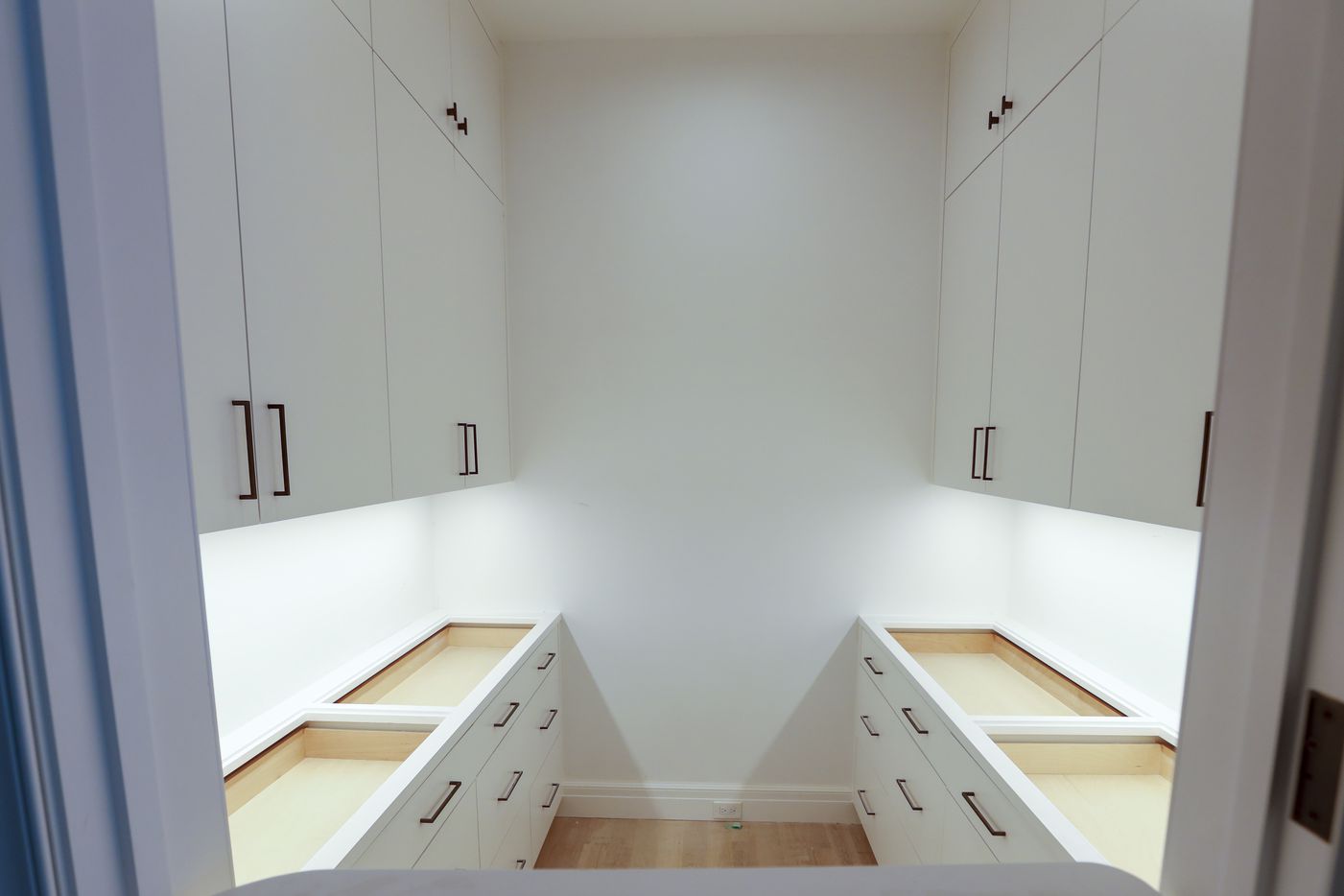 9/17A concessions room outside the movie theaterwill have glass-topped counters with snacks like those of a traditional movie theatre.(Elias Valverde II / Staff Photographer) 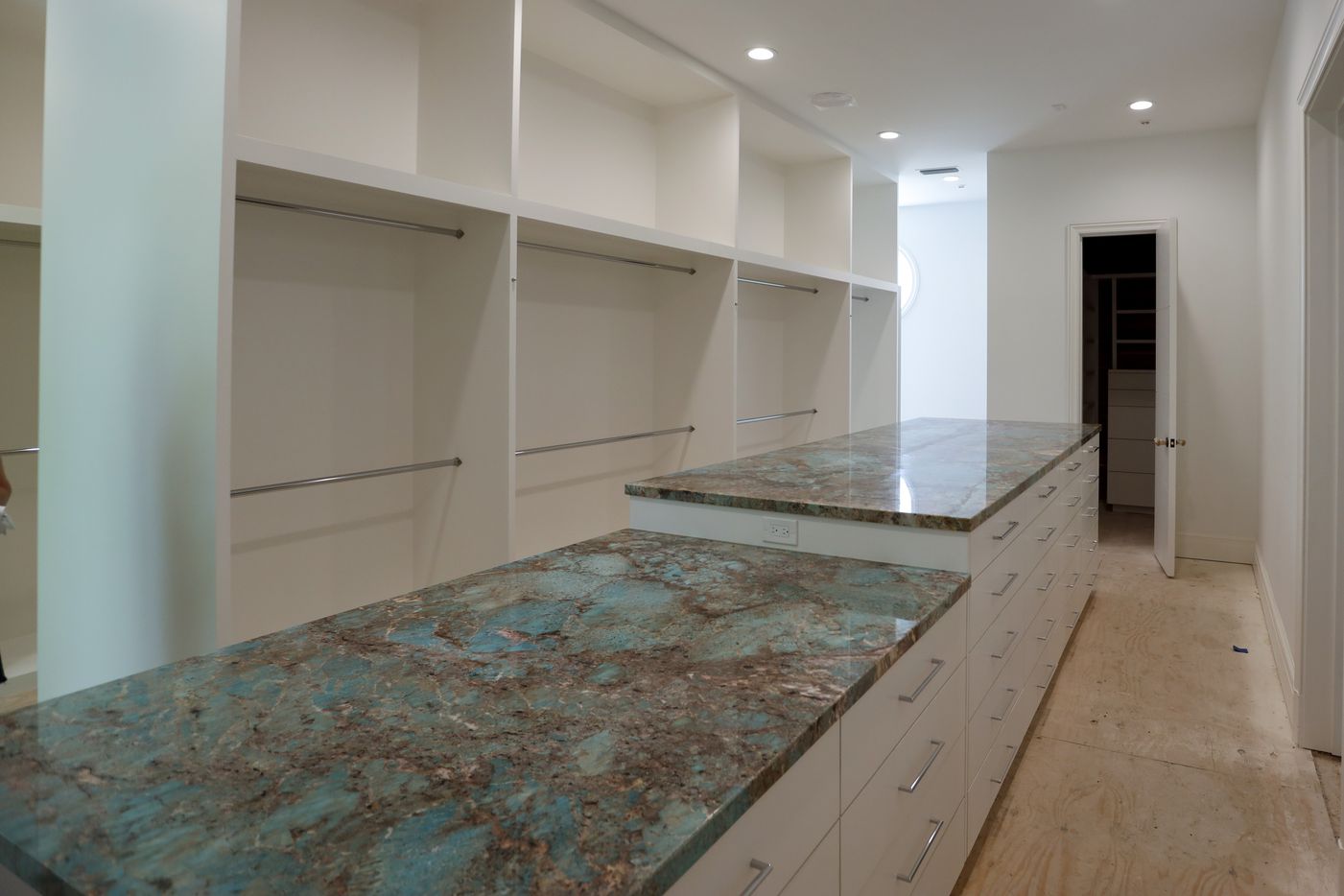 10/17One of two closets in the master bathroom has an Amazonite-topped bank of drawers and three aisles for clothes, shoes and accessory storage.(Elias Valverde II / Staff Photographer) 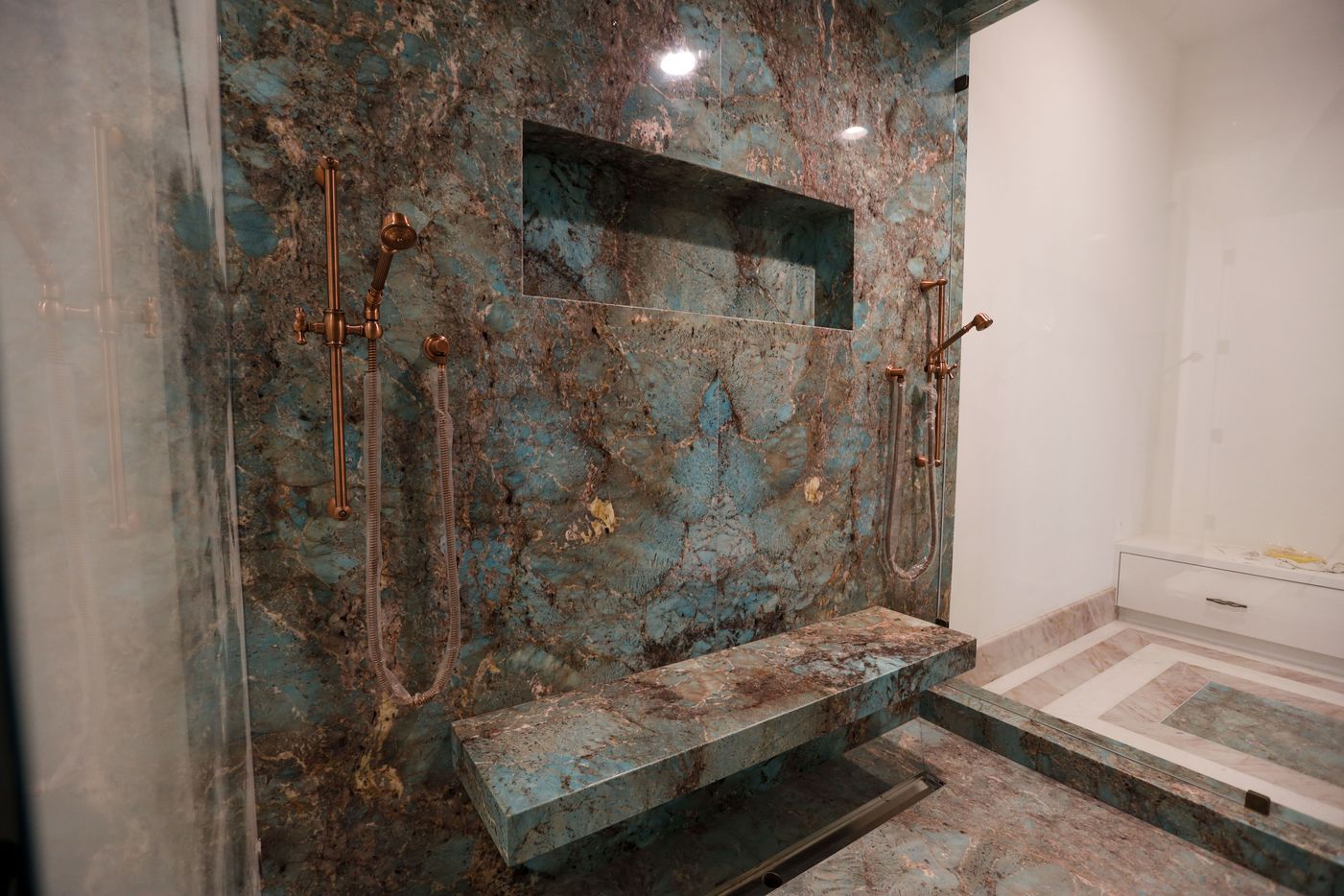 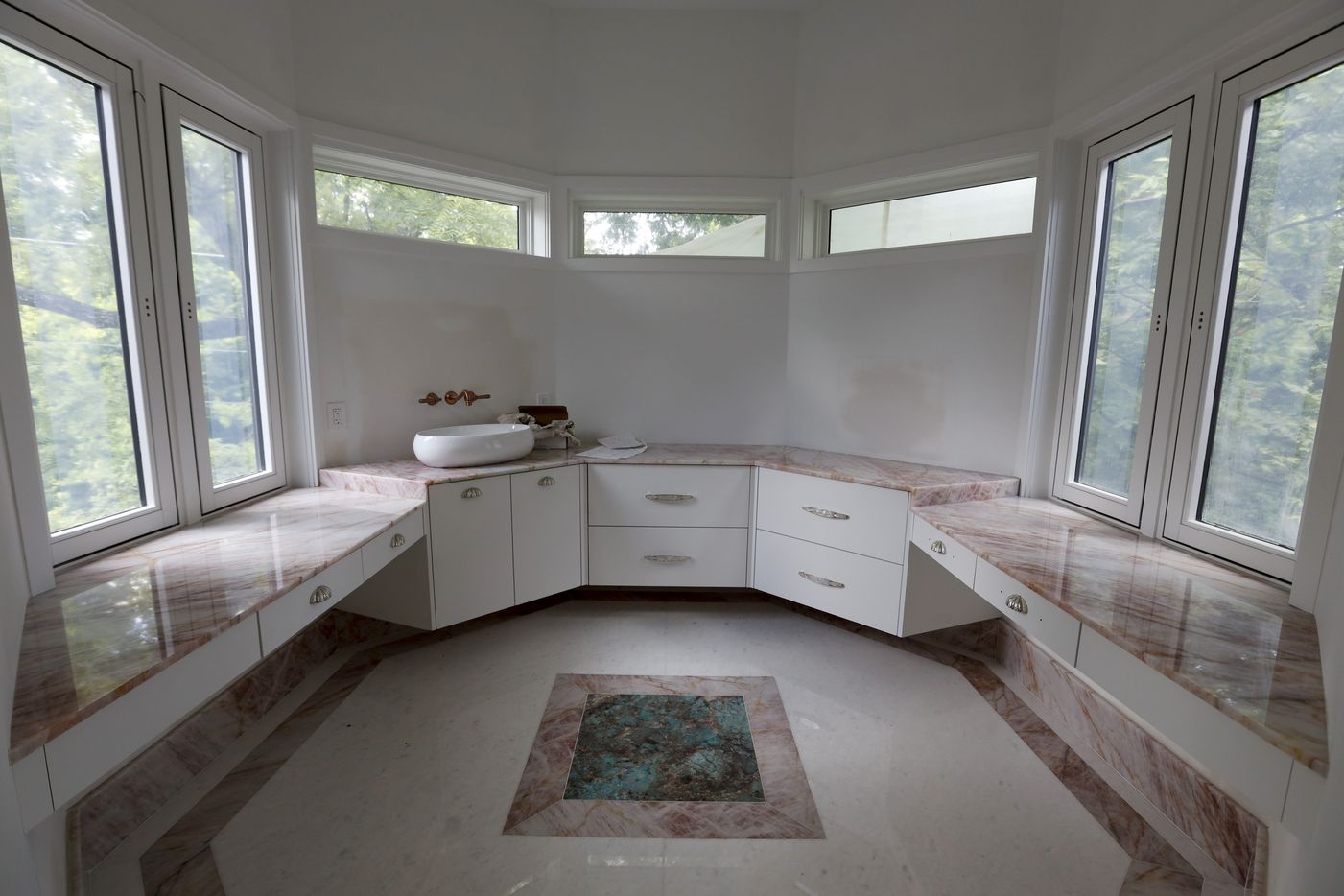 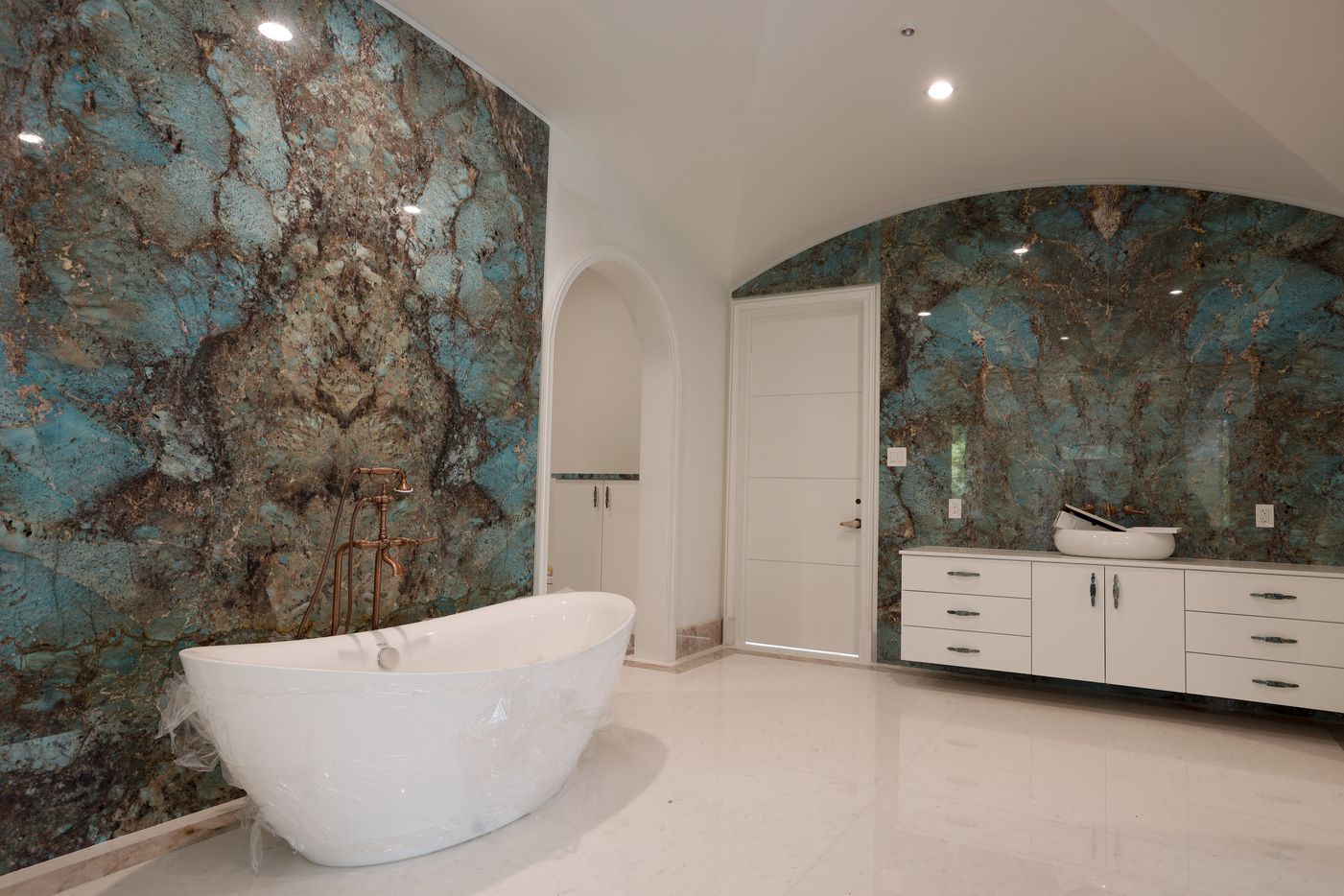 13/17The master bathroom has Amazonite walls and a rose quartz border along the floor.(Elias Valverde II / Staff Photographer) 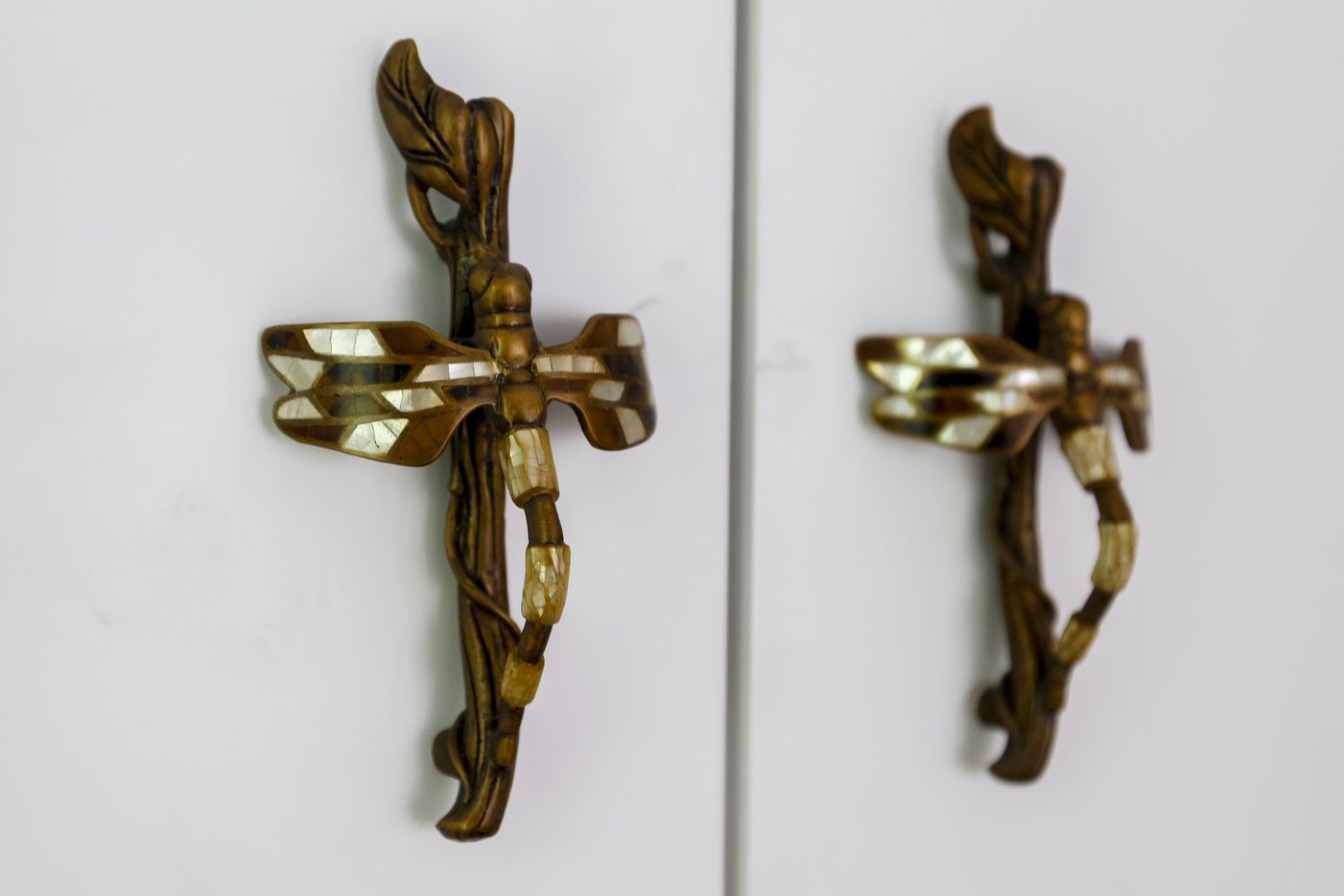 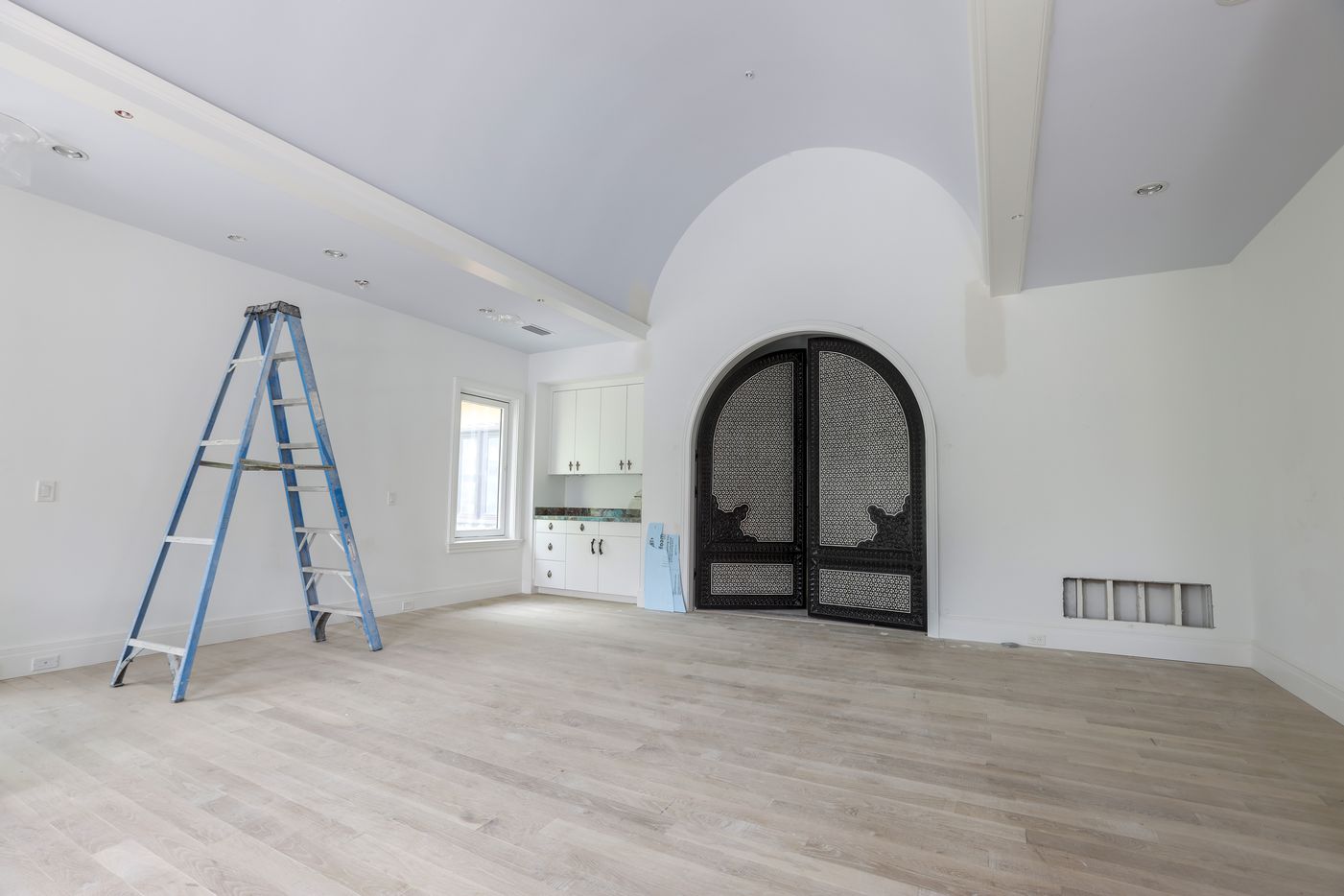 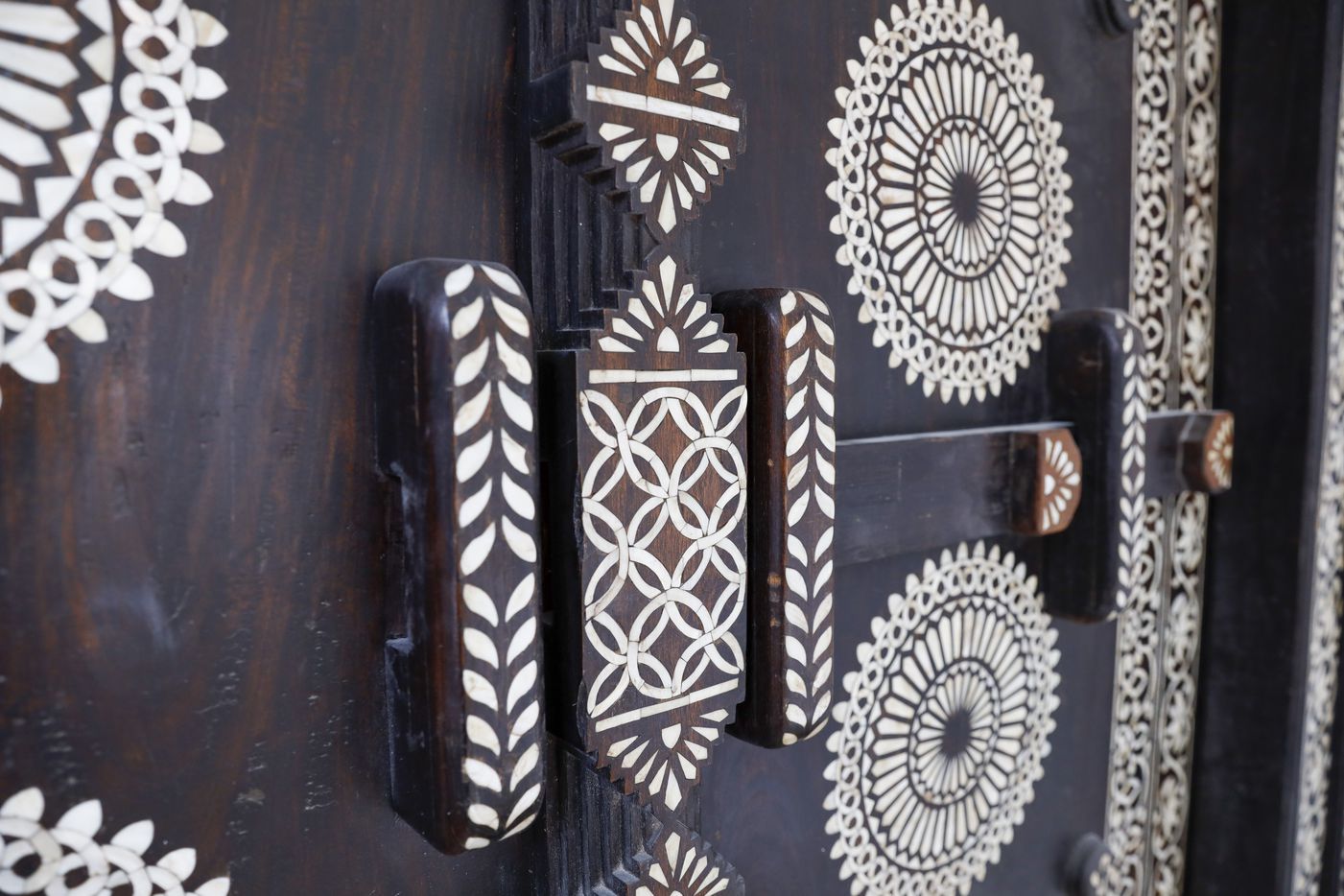 16/17The doors at the entrance to the master bedroom are from India and feature mother-of-pearl inlays.(Elias Valverde II / Staff Photographer) 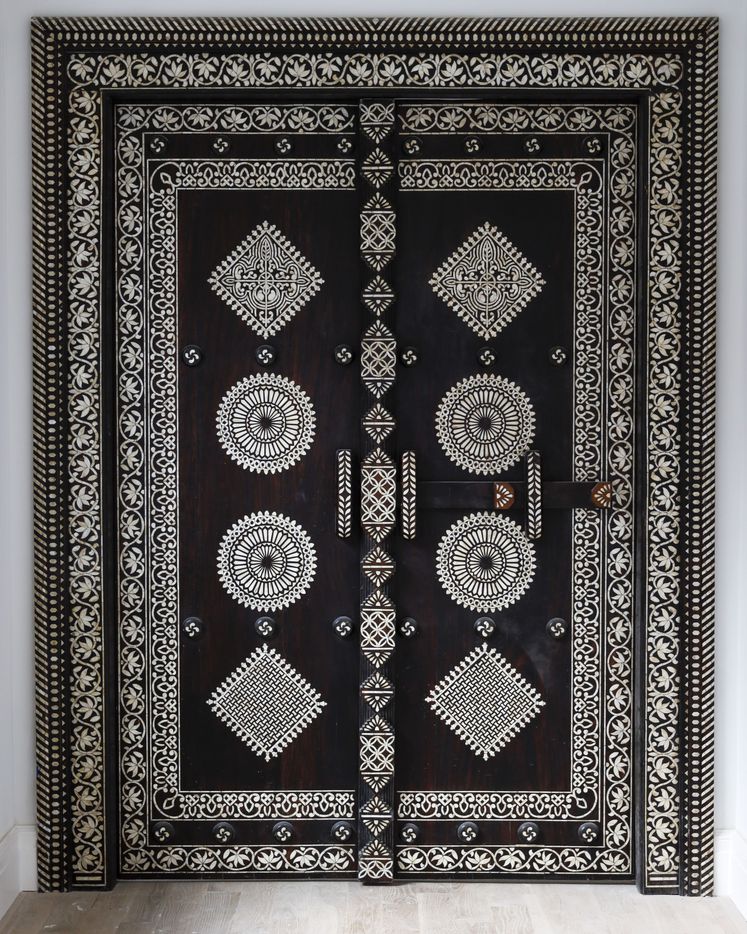 17/17The doors at the entrance to the master bedroom were imported from India.(Elias Valverde II / Staff Photographer)

The second level of the home also includes the media room, or theater, that has auditorium-style seating and a separate room for snacks. The theater is large enough to fit 18 people and can accommodate a 120-inch screen. There’s a powder bathroom next to the theater.

The exercise and wellness facilities are on the opposite side of the second level, with a yoga room, an exercise room, storage for exercise equipment, a sauna, a spa-like bathroom with red tempest quartzite walls and floors, and a large window that overlooks the backyard.

Under the home, there’s a large garage that can fit 15 to 20 cars, with seven outlets for electric vehicles. There is also a catering kitchen, a safe room with its own bathroom, wine storage, an elevator and additional storage on the basement level.

David Rolston is the landscape architect for the home, and Cheryl Price of Fountainhead designed the pool and spa. The back patio of the home will have an outdoor kitchen, space for outdoor living and dining, and a fireplace clad in Colorado river rock.

When asked whether it’s hard to imagine someone else living in a home with such a personal design, Thompson said she’s conflicted.

“One day, I would answer you one way, and the next day I might answer the other way,” Thompson said.

If the home doesn’t sell by the time the property gets the certificate of occupancy, Thompson says she’ll move in. If someone buys the home, she plans to build a smaller version across the street on the other family-owned property.

The home at 6915 Baltimore Drive in University Park is listed for $37.5 million by JB Hayes and Ralph Randall of Briggs Freeman Sotheby’s International Realty.